Poetry fascinates me. The math of it – that meticulous balancing of ideas, through image, metaphor and other devices; and the music of it, meticulous again, that selection of words and their order until they sing. It’s the kind of fascination that makes it not just possible, but essential and delightful (even when agonising) to spend hours, days, weeks and more honing a poem until it’s as close to right as I can get it. Then after all the scribbling and tossing away and starting all over again, after all the tinkering and tweaking – the relief (if I’m lucky) of still being moved by the finished work. As Horace said, ‘If you want to move me to tears, you must first feel grief yourself.’ As a reader, these same things fascinate me, but in reverse order. First, the elation when my initial experience of a poem is its unique melding of sound and sense so that, one way or another, it opens my heart, my mind, my eyes. Then the fun of sussing out the technical devices the poet used so well they slipped modestly into the background, allowing the poem as a whole to work its magic.

Found poems crafted from the vivid prose in a diary my father, Jack Shreve, kept when he was 21 and working as a deck-hand on a freighter during the Great Depression. This book offers an up-close, first-hand look at the work the men did, the conditions they lived in, and their often volatile relationships. Includes several prose vignettes from the diary along with photos from the trip.

“Form literally elevates content in this series of collaborations from beyond the grave between parent and child, and amongst genres. Shreve is a master of the villanelle in particular, turning the details of her father’s rough diary into the sleekness of the rolling, circular, repeating form … The reader really obtains a solid sense of Shreve’s father and his salty milieu through her steadfast attention to transforming material into melody.” – Catherine Owen (Marrow Reviews)

"Ritual, precision, wildness, wonder—these are the means by which Sandy Shreve finds new power in her fourth collection of poems, Suddenly, So Much. Improvising upon the ‘measured step’ of forms such as the pantoum, triolet and sonnet, and techniques such as deep indentation in “Footsteps,” … she creates time-shifting, wonder-inducing effects." – Leslie Timmins, in The Danforth Review

"... an articulate and beautiful investigation into a vibrant past peopled with fascinating and compassionately rendered characters."– Suzanne Buffam, Feminist Bookstore News.

"... a lucid and intelligent book of poems. The author blends events from her private life with concerns about major social issues in a skillful melding of micro- and macrocosm." – Don Precosky, Event.

"Her first collection of poems from the workaday world is rooted in the common grind and an uncommon eye for what gives it significance. This verse is sensitive, clean and strong." – The Ottawa Citizen.

In the decade since the publication of the first edition of In Fine Form, there has been a resurgence of Canadian poets writing in “form” – from ballads, ghazals and palindromes to sonnets, villanelles and more. The first edition was called “groundbreaking” and “a landmark text.” Since then this anthology has been used widely in classrooms and at large by students, writers and readers. With 189 poems and almost 51 new poets, this 2nd edition continues to break new ground, exploring new forms not acknowledged in most other anthologies, including prose poems, found poems and spoken word.

“… a groundbreaking anthology of Canadian form poetry…the book serves as a call to arms, a rallying cry for an embrace of formal poetics …a paradigm shift” – Robert J. Wiersema, Quill and Quire . 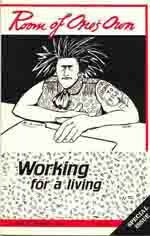 This special double issue of the feminist journal Room of One's Own (now Room Magazine) features poems and stories by women about their work. 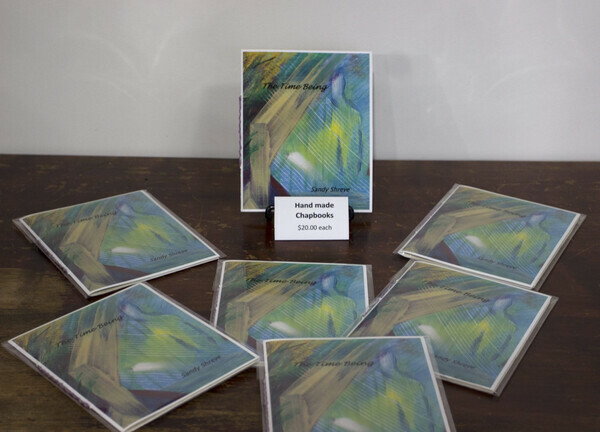 In 2020 I self-published a limited edition chapbook featuring 20 previously published poems, some paired with my paintings or photo art. Hand sewn, with a delicate specialty paper flyleaf, and printed on antique paper; an ideal gift for a poetry lover.

Signed/numbered limited edition of 20 - sold out.

"I loved the intricate and masterful triolets. What compelling sonar interweavings!" – Susan McCaslin

"I was really struck by the suite poems, as well as the relay and the carnival [haiku]. They kind of sing and dance at the same time, like individual piano keys, struck just right, to produce a sound that is rich and ‘plucky’." – Bibiana Tomasic 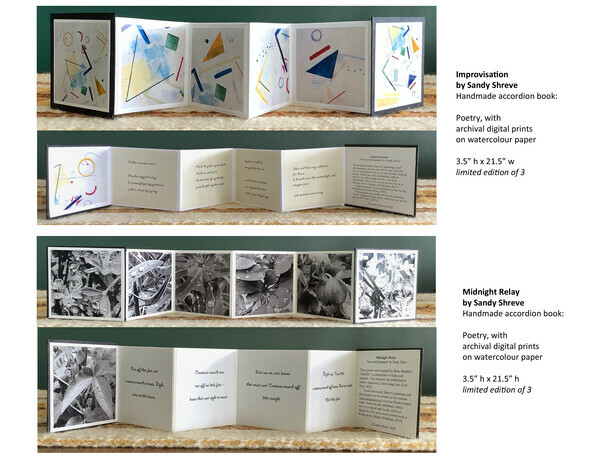 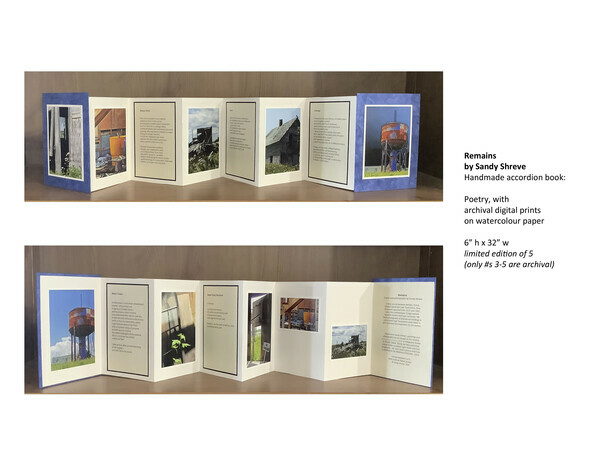